Here at VooDoo Spirits, our flagship product is sodabi. But what is sodabi?

How Sodabi is traditionally made

Sodabi is a traditional liquor from West Africa. The specific term Sodabi is indigenous to Benin and Togo, though in other parts of West Africa the term changes depending on the region and language. It’s made by distilling the fermented palm sap of the African oil palm (Elaeis guineensis), the raffia (Raphia vinifera) or the rônier (Borassus aethiopium), which are indigenous to the West African region. The sap is a very light, sweet, and vitamin-rich liquid that carries natural yeast to ferment. This sap is a safe and delicious drink as-is in its raw form. Due to the naturally-occurring yeast within the sap, it quickly ferments in the warm West African climate, usually over the span of 3-6 days. Once this alcohol is present in the sap, it’s now referred to as Palm Wine, and can be consumed as-is. However, this Palm Wine is not yet sodabi!

Botanical representation of the Elaeis guineensis used for sodabi production. 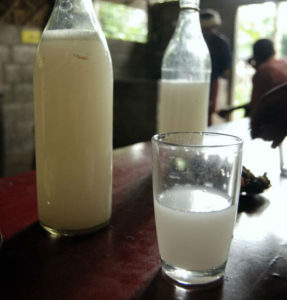 Palm Wine still with a milky white color, before being distilled.

The Palm Wine becomes sodabi after it has been distilled into liquor. This process of distillation increases the alcohol percentage, which can vary depending on the distiller, but is most commonly found to be 20% - 40% abv. As with all distilled spirits, the liquid leaves the still in clear form without any color or additives. Once the liquid leaves the still, it’s now considered sodabi! In this clear, pure form of sodabi, it’s ready to be bought, sold, and consumed. While it’s ready to drink as-is, it is often modified by vendors or end-consumers by customizing this clear sodabi by adding additional ingredients that infuse with the sodabi inside of the bottle. Whether consumed clear and pure, direct from the still, or infused with additional ingredients, these forms of the drink are collectively known as sodabi.

Sodabi is a palm liquor that has been enjoyed for hundreds of years by the people of West Africa, despite its illegalization throughout European colonization due to its perceived threat to European liquor imports. During this time, the sodabi tradition persisted quietly outside of the colonists’ surveillance, as it was believed to yield Voodoo powers that increase strength, stamina, and well-being, as well as offer certain divine protections against bad fortune and evil spirits. Today, sodabi is a legal yet continues to be predominantly made in small villages with rudimentary and unsafe distilling equipment, which leaves harmful chemicals and heavy metals in it that pose a health risk to those that consume it. VooDoo Spirits is the first company to utilize industry-standard distilling equipment for sodabi. Using our strict quality control measures, our goal since day-1 has been to produce the world’s best sodabi that is both safe and delicious while celebrating its traditional roots.

Because of the versatility of sodabi, it has many uses in both daily life and special events. It’s a popular aperitif before meals, as well as a digestif after meals, or simply enjoyed amongst friends and family. More elaborate infusions are often used to kick off business negotiations as a sign of good faith and comradery. Sodabi is also used for medicinal or spiritual purposes based on the type of ingredients that were infused into it. Specific ingredients and their respective curative affects vary greatly depending on the regional, cultural, and familial tradition. Whether for fun, for business, for healing, or for spirituality, sodabi’s versatility make it an important and constant accessory in daily life.

What is Tambour Original?

You now know what sodabi is. Now learn how our flagship brand is pushing the boundaries, making a premium sodabi to share around the world.

Learn how our subsidiary company in Benin, West Africa, plays a pivotal role in our sodabi production.

Making the world's best sodabi isn't the only thing we concern ourselves with. Take a look at some of our initiatives for a positive impact on Benin's environment and economy.

ABOUT US
VooDoo Spirits is a Deleware C-corp headquartered in the state of New York. It operates in West Africa through a fully-owned subsidiary, La Distillerie Beninoise SARL.
Contact us: info@voodoo-spirits.com
FOLLOW US
© VooDoo Spirits, inc. 2020